The Brain Detectives: UC Davis Neuroscientists Investigate The Brain to Solve The Mysteries of Mental Health

The Brain Detectives: UC Davis Neuroscientists Investigate The Brain to Solve The Mysteries of Mental Health

Scientists are sleuths and sometimes in a research case, the tiniest biological clues lead to big breakthroughs. To understand how we function, we first need to understand our building blocks.

Take the human brain. As the source of consciousness, this three-pound organ, composed of roughly 86 billion neurons, holds the keys to understanding the human condition, both in its healthy and diseased states.

Fortunately, the UC Davis Center for Neuroscience (CNS) is on the case. World-class PIs (principal investigators) at CNS collaborate in state-of-the-art facilities to find solutions to help treat, prevent and cure brain conditions, like schizophrenia, autism, depression and Alzheimer’s disease, among others.

“Our researchers work around the clock, using cutting-edge approaches to discover how brain function is altered in mental illness so that we can develop more effective diagnostic tests, treatments and cures to improve the lives of our friends and loved ones suffering from these common diseases,” says Kimberley McAllister, director of the Center for Neuroscience. 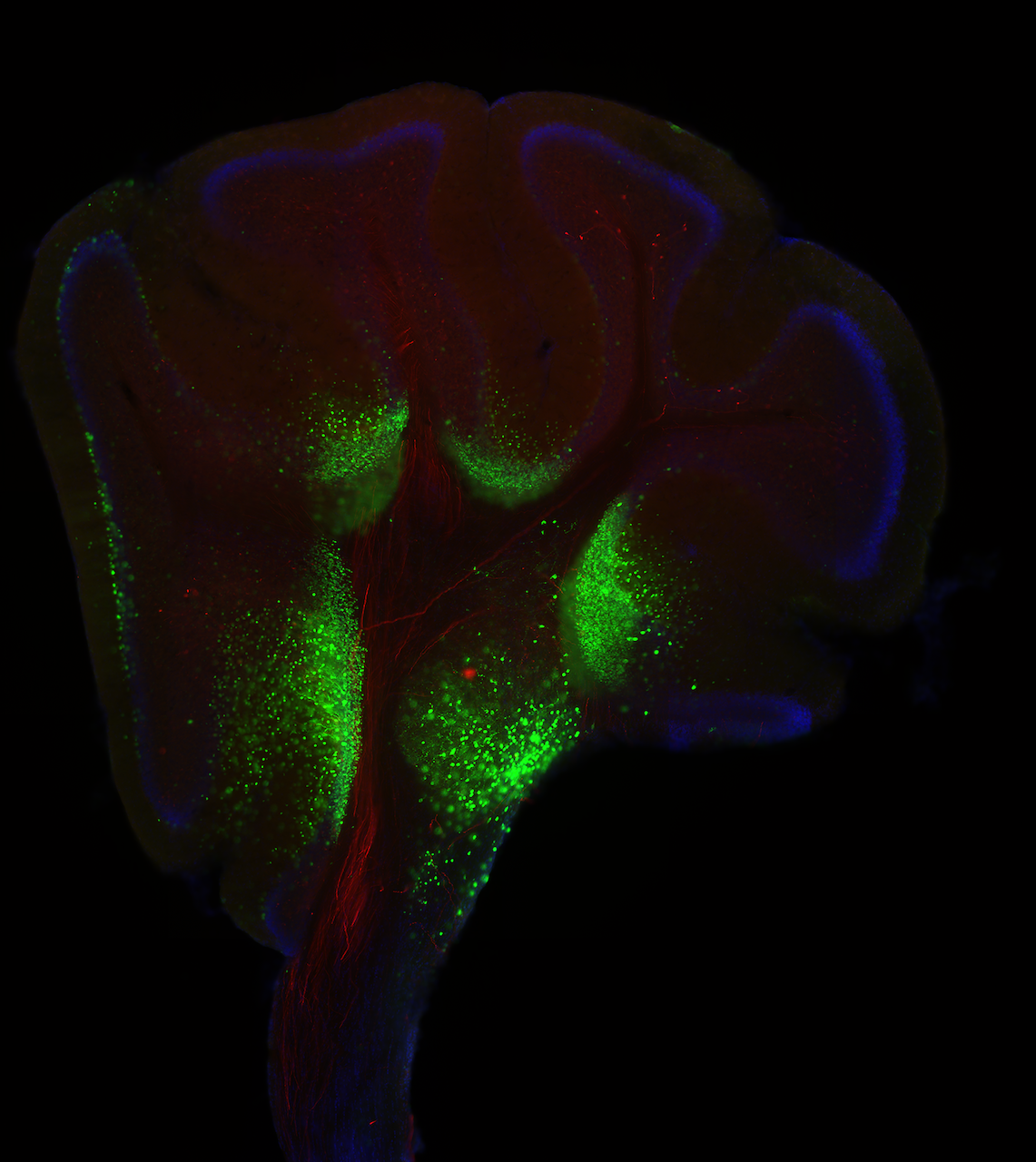 Photo: The cerebellum was long known to be integral to motor function, but scientists recently discovered that malfunction of this region is associated with anxiety, depression, autism and post-traumatic stress disorders. Fioravante Lab

The Hidden, Neural Racetrack of the Brain

Like a detective following small clues to see the big picture, Alex Nord, an assistant professor of neurobiology, physiology and behavior, follows genetic mutations that give rise to conditions like autism and schizophrenia. Thanks to advances in genomics, geneticists like Nord can link specific mutations in the genome to these diseases, but questions remain regarding why certain mutations lead to such complex mental health problems. It’s like knowing where the start and finish lines are of a racetrack but not knowing the course between those two points. To illuminate the racetrack, where pathways for new treatments might lie, Nord and his colleagues investigate de novo mutations.

As the senior vice president and director of research of the investment firm Dodge & Cox, C. Bryan Cameron has made a career off investing in excellence. Now, he’s investing in the UC Davis Center for Neuroscience with a $1.5 million gift, which the UC Office of the President matched with a contribution of $500,000, to establish the C. Bryan Cameron Presidential Chair.

“As the public sector contributes less to higher education, it is more and more important for the university to partner with private individuals and institutions with the goal of attracting and retaining the best faculty possible,” says Cameron.

The gift will advance Carter’s research on developing new treatments for brain disorders, like schizophrenia and obsessive-compulsive disorder. Using leading-edge techniques from behavioral, computational and functional neuroimaging, Carter investigates neural mechanisms underlying attention and memory. By better understanding these cognitive systems, he hopes to discover new therapies that will help those diagnosed with clinical brain disorders.

“I am incredibly honored to be the recipient of the Bryan Cameron Presidential Chair,” says Carter. “With something like the Bryan Cameron Chair, we’re able to do high-risk, high-gain research that wouldn’t be supported by the typical funding institutes and in doing that, we can generate some bigger returns.”

“A de novo mutation is a mutation that just occurred in that person, so it’s not passed down from parents,” says Nord. “This [mutation] usually happens during the formation of eggs or sperm or early on in development.”

Most de novo mutations have no impact on health, but a small proportion can disrupt critical genes, causing changes to brain development and function. Since de novo mutations aren’t heritable, scientists can identify mutated genes with high confidence when comparing the genomes of parents and offspring. That’s how the gene CDH8 blipped onto Nord’s neuro-radar.

“Very few individuals carry a mutation in this gene CDH8,” says Nord. “Those that do have been almost 100 percent uniformly diagnosed with autism and most also have been diagnosed with a developmental delay or an intellectual disability, a pattern that is shared in other disorders such as Fragile X syndrome and Rett syndrome.”

As neurons are born, billions of synaptic connections form between them. Nord and his team found that mutations to CDH8 alter these developmental steps, disrupting critical processes that enable the complex structure and function of the brain. Some of the changes Nord and his colleagues have identified are also caused by mutations in other genes associated with autism and intellectual disability.

“What this suggests is that there’s this kind of potentially universal change in cells that manifest itself when a brain is constructed to having these really complex disorders like autism,” says Nord.

Nord uses similar approaches to identify connections between genetics and disruption to brain development and function in those with schizophrenia.

“One of the things that’s fun with genetics is that you kind of are led to whatever the consequences of a mutation are,” says Nord, who admits he’s no expert in synaptic development. “Being at the Center for Neuroscience, we don’t just sit in a room by ourselves and throw up our hands and say, ‘We’re stuck.’ I can just walk down the hall and talk to my colleagues here.” 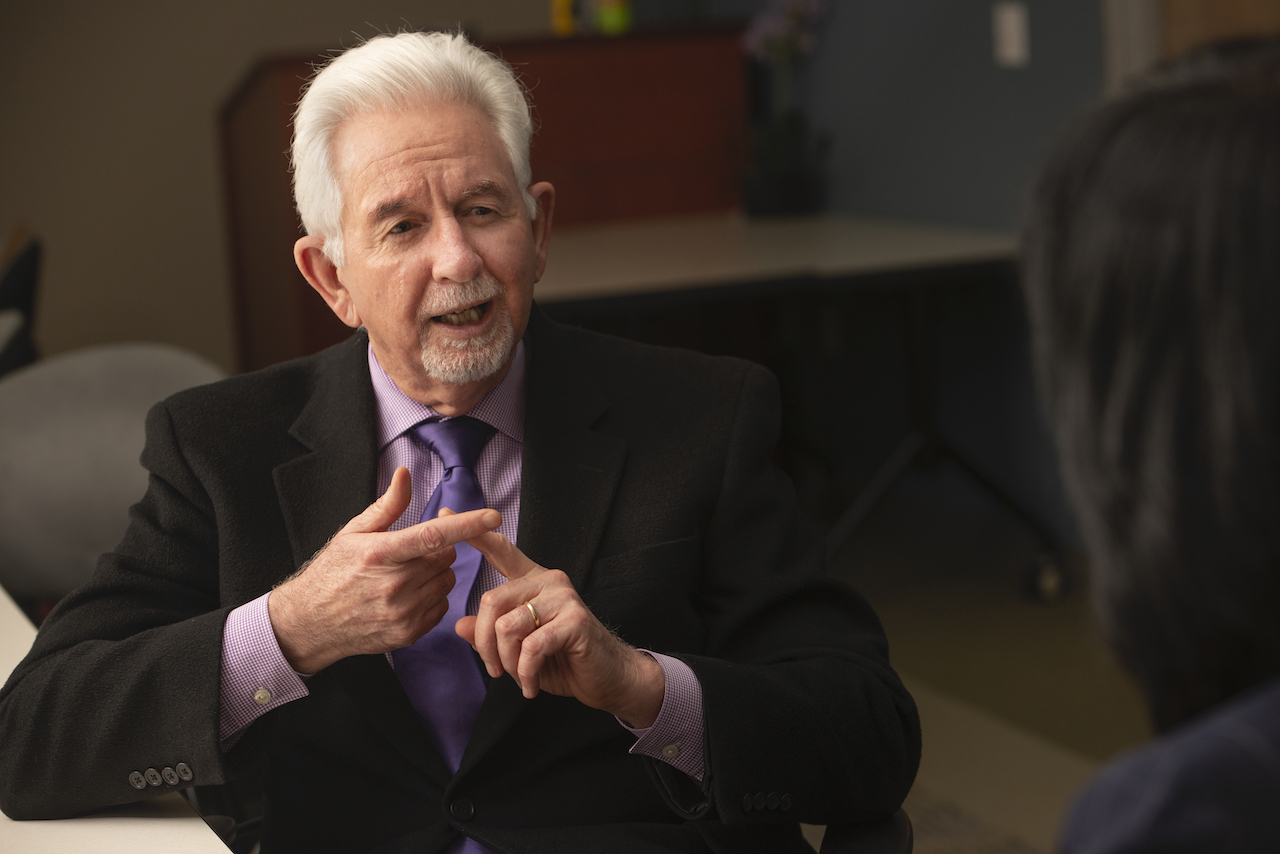 Just a stone’s throw from Nord’s office at the Center for Neuroscience, Diasynou Fioravante, an assistant professor of neurobiology, physiology and behavior, unravels the circuitry involved in thought, emotion and predictive behavior.

“The reason why you can perform and you can focus on a specific task is because everything around is expected and therefore you can ignore it,” says Fioravante.

One brain region involved in such predictive behavior is the cerebellum. The cerebellum was long known to be integral to motor function, but scientists recently discovered that malfunction of this region is associated with anxiety, depression, autism and post-traumatic stress disorders.

Fioravante wants to untangle the mysterious genetic landscape of cerebellar circuits to reveal their role in these non-motor functions. With her colleagues, she collects neurons from different parts of the cerebellar circuitry and uses genetic techniques to see what makes them unique. Her recent research highlights communication between the cerebellum and the limbic system, which plays a major role in emotion and emotional learning. To study this communication, Fioravante decodes the electrical language of neurons using techniques like electrophysiology and calcium imaging, and manipulates the electrical activity of neurons in her study subjects, mice, using optogenetics and chemogenetics.

Fioravante recently identified three previously unknown brain circuits connecting the cerebellum to the limbic system. These circuits weave through brain regions integral to cognitive function. Fioravante hypothesizes that they might play an important role in the neuropathology of post-traumatic stress disorders, which affect around nine million Americans.

“Is it possible for us to manipulate the cerebellum and how might those manipulations help patients overcome the fear that is associated with post-traumatic stress disorders?” Fioravante wonders.

From Molecules to Patients

The greatest strength of the Center for Neuroscience is the feedback loop between foundational research and clinical practice. Based at UC Davis Health, Cameron Carter, a distinguished professor of psychiatry and psychology, operates at the nexus of theory and practice.

The UC Davis Silvio O. Conte Center: Getting to the Root of Schizophrenia

Schizophrenia affects around 20 million people. Distortions in perception, thinking, emotions and language plague those with this mental disorder. What’s more, long-held stigmas about schizophrenia still loom large in the public eye. The same holds true for those with other mental illnesses.

“One in five individuals worldwide, and one in three college students, struggle with some form of psychiatric disorder, yet recent estimates suggest that up to 75 percent of people don’t get the help they need,” says Kimberley McAllister, director of the Center for Neuroscience. “Mental illness is caused not by personal weakness but rather by biological alterations in neurochemistry and brain functioning that are often treatable.”

The UC Davis Center for Neuroscience is getting to the root of schizophrenia thanks to a $10 million grant from the U.S. National Institutes on Mental Health Research. UC Davis Silvio O. Conte Center researchers use techniques from molecular, cellular and cognitive neuroscience to investigate links between viral infection during pregnancy and an increased risk of a child developing schizophrenia. Research shows maternal infection alters synapse formation during neurodevelopment, leading to a cascade of neurological events that could lead to schizophrenia-related behaviors.

“We know that most pregnancies don’t result in offspring with schizophrenia and we’re using that knowledge in our models to develop ways to predict those at risk,” says McAllister.

“By working as an integrated team, we hope to accelerate discoveries that’ll allow us to detect schizophrenia reliably and much earlier and to develop better treatments.”

“The main focus of our research is understanding the changes in functional circuitry in the brain that are related to the development of serious mental illness, and in that category are schizophrenia, bipolar disorder and other sort of serious, significant mental illnesses that typically have their onset during adolescence or young adulthood,” says Carter.

Using noninvasive neuroimaging and electrophysiology methods like EEG and fMRI, Carter measures and maps aspects of cognition disrupted in those with illnesses like schizophrenia. Their neurons, according to Carter, show less connectivity across the brain, leading to a breakdown in healthy cognition.

Dopamine production is also affected in the brains of patients with schizophrenia. This neurotransmitter plays a role in learning, memory, processing rewards and motivation. Dysfunction in its production, according to Carter, seems to be associated with the hallucinations and delusions typically associated with psychosis. Changes in cortical circuitry seem to precede this shift in dopamine dysregulation.

Carter partners with patients to get a better understanding of their disorders. The information, combined with different levels of advanced neural analysis, hold promises to revolutionize therapies.

“We can drill deep down into the underlying causes and see if we can do something somewhat more profound that could actually change the course of the illness before it gets to the point where it’s really disruptive to people’s lives,” says Carter. “If we can get a little closer to the beginnings, to the causes, to the roots of illness, the underlying pathophysiology, we may be able to come up with different kinds of interventions that can change the course of things in a more fundamental way and help more people.”

At the UC Davis Center for Neuroscience, researchers use team science to solve the mysteries of the brain. From foundational to translational, their research is poised to make big waves in the century of biology. 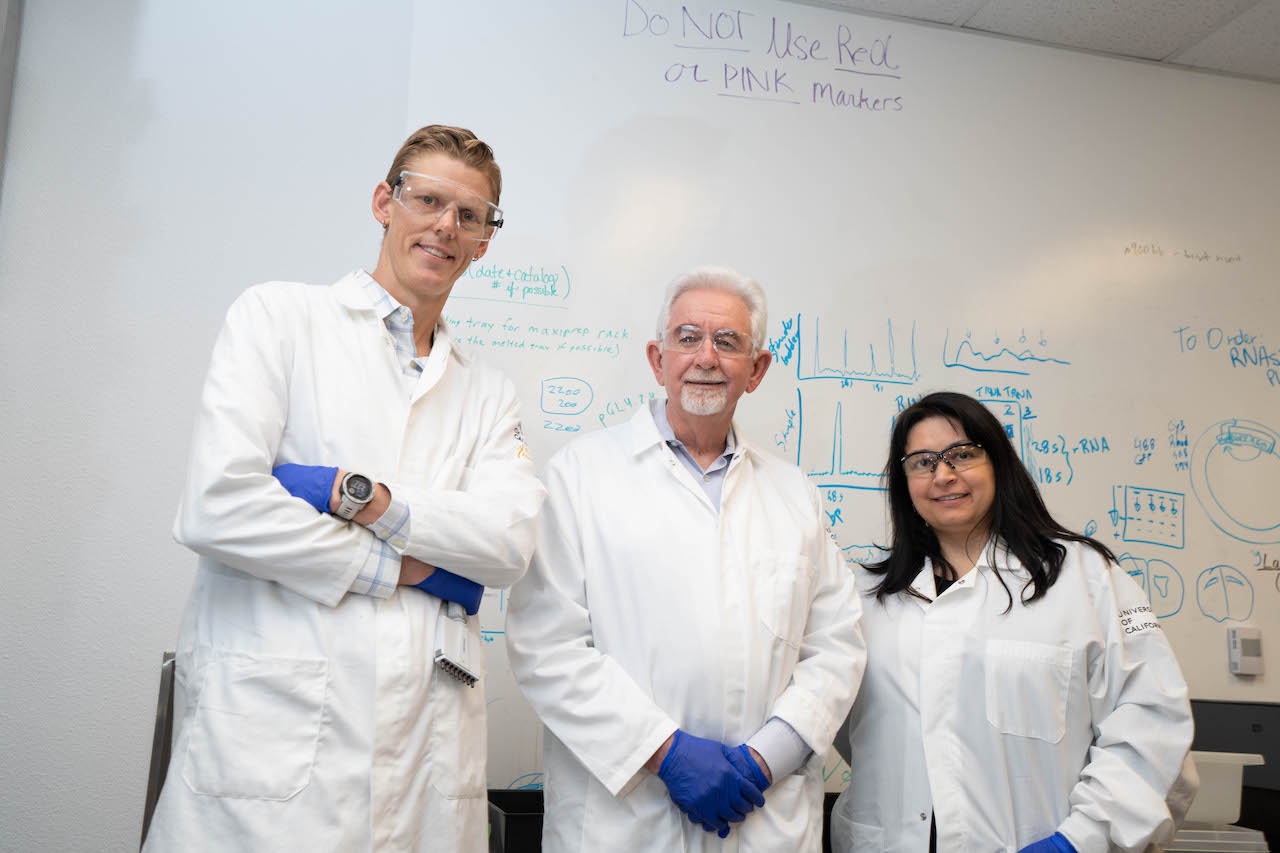 Photo: The greatest strength of the Center for Neuroscience is the feedback loop between foundational research and clinical practice. David Slipher/UC Davis